Houston Temple Pictures by Robert Boyd: Flourishing After the Flood

With years of experience under his belt, Robert A. Boyd is one of our most prolific LDS temple photographers. The Houston Texas Temple is especially important to him and his family. Read on to learn more about this dedicated photographer and some history about the Houston Temple.

Robert was a successful photographer even before the technology and software that so many of us are familiar with today, such as Photoshop and filters. Older cameras required some time to warm up before capturing a quality photo, which meant the timing was crucial for a sunrise or sunset shot. Quality drone cameras did not exist, which meant dramatic angles were much more challenging to capture. With all of the bells and whistles that photographers have at their fingertips now, Robert’s art has only adapted and grown.

The Boyds (their children included) have put many early mornings, late nights, and long road trips into getting just the right photos of these sacred buildings. As Robert put it, “I get very little sleep on photography trips.” But it is Robert’s motive that makes him a true artist. His goal is to bring the spirit of individual LDS temples into the homes of individuals and families. As he says: “It’s Heaven on Earth.”

Initially, he felt hesitant about earning money for his work since the subject matter of LDS Temples was so close to his heart and so religion-based. However, he felt a spiritual confirmation to continue his efforts and move forward in being a photographer full-time so that he might share his stunning gift with the rest of us. During this unique time when temples are closed, we are so grateful he has chosen to do so!

The Houston Texas Temple holds special meaning for Robert and Eleah, his wife. They currently work there as volunteers for the short amount of time allotted to temple service at this time. Some of their favorite experiences include helping young Latter-day Saint missionaries. These are often missionaries who were not able to receive their endowments before putting on their name badge.

Robert waded through feet of murky water in sandals to capture these photographs. He and Eleah were evacuated from their home once the Houston flood waters reached their doorstep. Thankfully, the Boyd’s house remained much the same as how they had left it.

The Houston Temple flood photos from 2017 have been some of Robert’s most popular, especially directly after the event. They illustrate that challenges happen to all of us, even when we feel like we have the right focus in our lives. They show us that there is always hope for a better future.

These next few pictures have brought many local church members peace. They are reminders of the miracles they saw during that year. 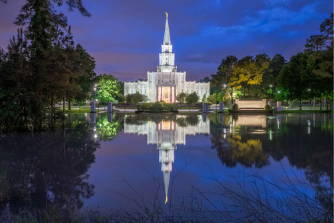 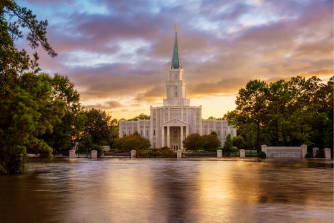 Houston Temple - Reflection of Hope by Robert A. Boyd 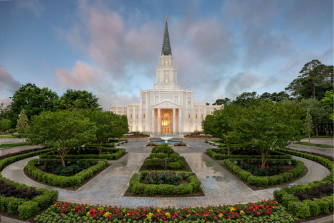 Robert reports that getting a good photo of the Houston Temple grounds is a challenge. They are surrounded by thick, full trees that often get in the way of even an aerial shot. However, characteristic of the Lone Star State, the grounds are overflowing with beautiful magnolias and blossoming crape myrtle trees.

Latter-day Saint Temple grounds are dedicated and sacred, just like the inside of the building. The manicured lawns and flowing flowerbeds reflect the special spirit that one can feel when walking along its pathways and sidewalks. Robert was up to the challenge. He has captured not only one Houston Temple picture, but several. 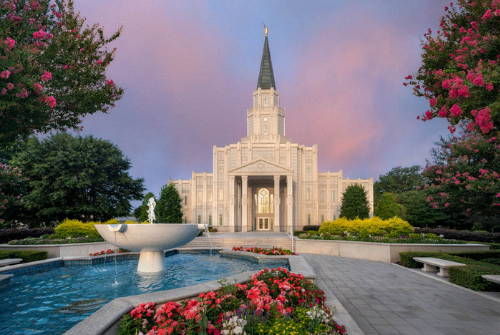 Houston Temple - A House of Peace by Robert A. Boyd 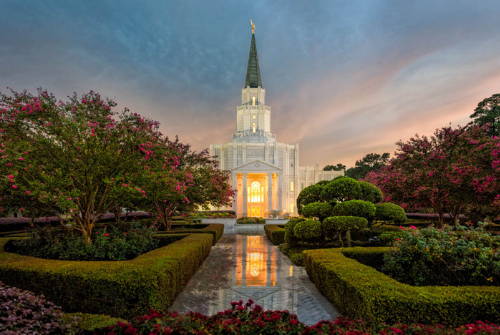 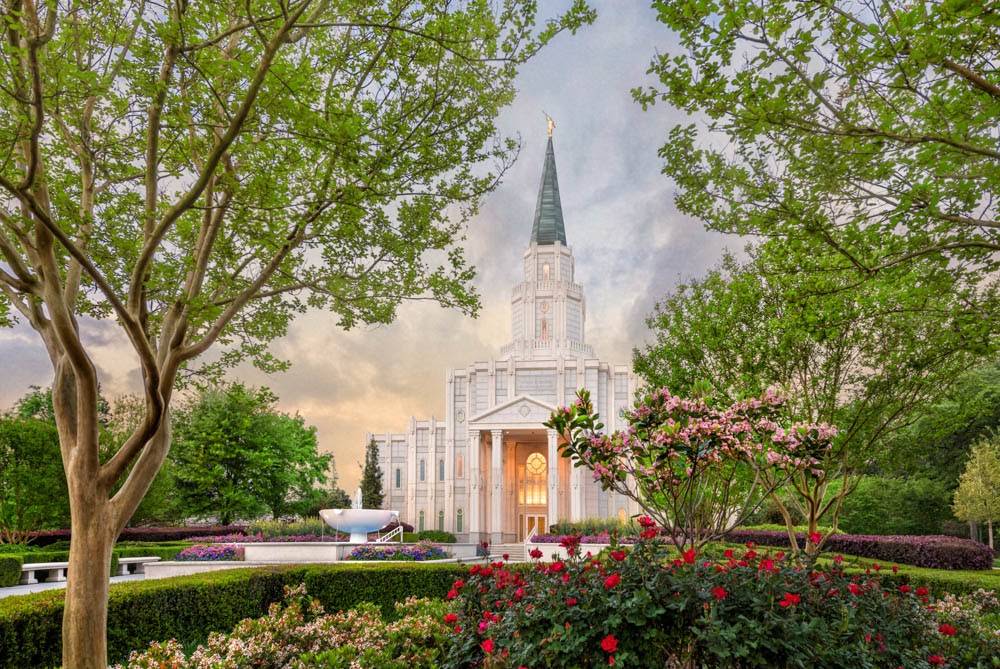 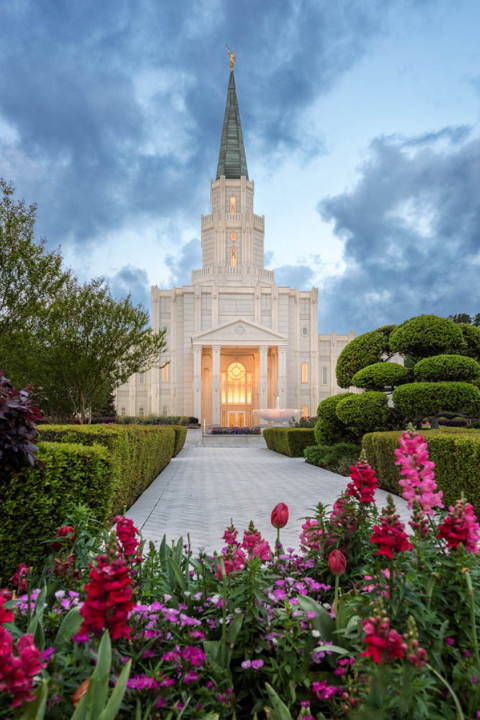 Many LDS temples display a life-sized Nativity around Christmastime. This photo is currently the only picture we have of the Houston Temple during the holidays. But we are crossing our fingers that we will get more in soon! 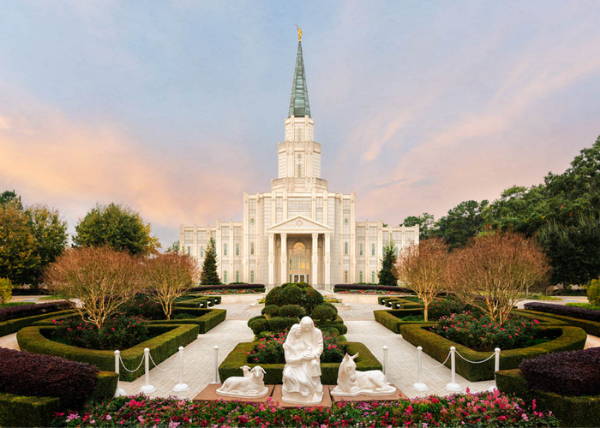 The Special Thing About Temples in Houston

So far, there is only one temple in Houston, Texas, but at the rate that the number of LDS Temples is growing, it may be only a matter of time before there are more. In any case, this one building has some unique history that most other temples do not.

Did you know the original architectural designs for the Houston LDS Temple were nothing like the building we see now? Originally, the Church designed the Houston Temple to be a sister temple to the Albuquerque, New Mexico Temple with a similar floor plan and features.

However, the landowner rejected those plans, insisting that the building have a design all its own. He wanted it to be grand and unique. So as a land developer, he got his designers on a team with the Church’s designers. The result was the beautiful architecture we enjoy today. It even includes multiple fountains, something typically rare on LDS temple grounds, which usually only feature one.

Eleah and Robert agree that the Houston Temple is very welcoming. Those who attend the temple could be dealing with any number of challenges. It is a great blessing to have a refuge that carries the warmth of acceptance and friendship.

This kind of trait might be due, in part, to the number of Church members in the area. In parts of the world where there is a large population of church members, temple workers are often limited in their years of service so that others may have an opportunity. In Houston, Texas, the number of church members is not so high. As a result, some workers have been dedicating their time and efforts for over a decade. That means the workers know each other and the patrons well, giving it the feeling of a family.

Robert and his wife Eleah have been traveling to capture these masterpieces for twenty years now. They have gone on over 500 temple photoshoots and counting. His collection includes 115 different LDS temples, including five themed series.

His LDS Temple pictures are known for their authenticity. He artfully crafted the placement of flowers, gates, walkways, and steeples in the photo angle. You can recognize his pictures by their visual balance. He has worked hard to perfect this trait in his art since balance communicates peace and calmness to the mind. It mirrors the peace and calmness that these sacred buildings speak to the soul to the soul.

But perhaps what stands out most of all is the heart he puts into each temple photo. Robert has a deep and personal love for his Savior, Jesus Christ. He understands the role these sacred buildings play in drawing us closer to Him. At its core, Robert's art expresses his contagious love and conviction for the temple.

What the Future Holds for Robert’s LDS Temples Pictures

From the beginning, Robert has wanted to make his art something different. He wanted to take a subject that had previously been rather plain and limited in the photography world and make it a work of art.

Robert and Eleah travel far and wide to get some of their temple shots. Often they go already knowing they will never sell enough of a certain temple to cover the costs for their trip. But their goal has always been and continues to be to inspire individuals and families. Nothing brings them more satisfaction than knowing that a photo of a specific temple brought comfort and hope to a home. They want to photograph as many temples as possible to make them available to church members everywhere. They already have travel plans in place to capture temples currently under construction.

As Eleah excitedly said: “We’ll keep taking photos until we no longer have strength.”