At the end of the April 2020 General Conference, President Nelson encouragingly promised that: “As the Restoration continues, I know that God will continue to reveal many great and important things pertaining to His kingdom here on earth.”

It can be easy to think of the Restoration of Christ’s gospel ending with Joseph Smith’s First Vision or when the early saints reached the valley and built the Salt Lake temple. But that was only the beginning. God continues to reveal guidance and truth to us through His prophets, as we’ll be learning about next year with the 2021 Come Follow Me curriculum. The recent general conference talks so far have been a great lead into studying Doctrine and Covenants and Church History.

The early LDS pioneers sacrificed much to find Zion. Many of us today might feel like we’re trying to forge our path to the same destination. What better place to draw strength during these challenging times than from those believers that came before us?

Searching for heaven by Lightweave

In this beautiful piece by Kelsey and Jesse Lightweave, we see the young Joseph Smith searching the scriptures. What makes the imagery significant is that he is outside in his family’s field, maybe having just finished chores.

During this time, when church and temple attendance is limited, it’s a comforting reminder that we can experience Heaven’s embrace even amid the humdrum of our everyday lives.

As with many LDS art paintings of the First Vision, we see the brilliant light shining down on Joseph Smith. However, in Jeff’s painting, Joseph’s surroundings are not warm and green, but dark and barren.

In this depiction, the light is clearing away the darkness, symbolic of the gospel returning to the Earth, and what it can do for us in our own lives.

Labor of Love by lynde mott

Lynde Mott captures a quiet, everyday scene from the life of LDS pioneers.

The painting emphasizes the beauty of motherhood, bringing to mind the famous quote by William R. Wallace: “the hand that rocks the cradle is the hand that rules the world.”

Journal entries and stories galore attest to the vital role that the women and mothers had in the lds pioneers successfully crossing the plains.

This painting by Judy Cooley is a tribute to James Kirkwood, an eleven-year-old boy. With his widow mother and older brother pulling another injured sibling in the handcart, James was left to walk the entire trek with his four-year-old brother Joseph.

One night, the two boys were completely exhausted and fell behind the rest of the group. By the next morning, James succeeded in getting Joseph to the safety of his family’s camp, but upon their arrival, he fell dead from cold and starvation.

Joseph went on to live a long life, nearly reaching his 77th birthday. His biography records the account of his older brother James. This is only one of many tragic yet touching histories of the lds pioneers.

All is Well by Annie Henrie Nader

Annie Henrie Nader’s painting illustrates that while there were tragedies and hardships along the way, there were also miracles.

We often hear of the LDS pioneers who reported times when it felt as if someone else was pushing their handcart for them or when they saw Heaven’s hand guiding their footsteps.

We may not be called upon to risk life and limb, but we too can receive help and strength when on the Lord’s errand.

We may not be called upon to risk life and limb, but we too can receive help and strength when on the Lord’s errand.

ever Onward by Joseph Brickey

This piece by Joseph Brickey is a sobering tribute to the early saints’ strength and grit. You can almost hear the cold winds blowing and feel the powdery snow.

However, in the painting, the clouds are parted, and there is still light shining down on the handcart company. It’s a subtle message of hope, present even when all other surroundings are barren and cold. A reminder of what the lds pioneers taught us: our eternal destination is well worth the sacrifice. We too can press ever onward.

Finally, we have Eric Dowdle’s painting of the early Salt Lake Temple Square. The colors in this piece are vibrant, cheerful, and bright. It depicts the fruitful efforts of the LDS pioneers and the blessings that come with sacrifice.

While we may not be able to view our own lives as a completed picture, it can be inspiring to see where the efforts and hard work of others have led.

Hurrah for Israel by Robert Barrett

The early saints didn’t stop at finding Zion. They also wanted to expand it and help others to enjoy the same blessings. Missionaries--at their own expense and often without much to leave their families--answered the call to spread the gospel.

As a local Utah company, we owe much to what those early LDS pioneers have built, and we love when artists submit work to honor them. Find these masterpieces and more as wall art, posters, or mini cards on our website. 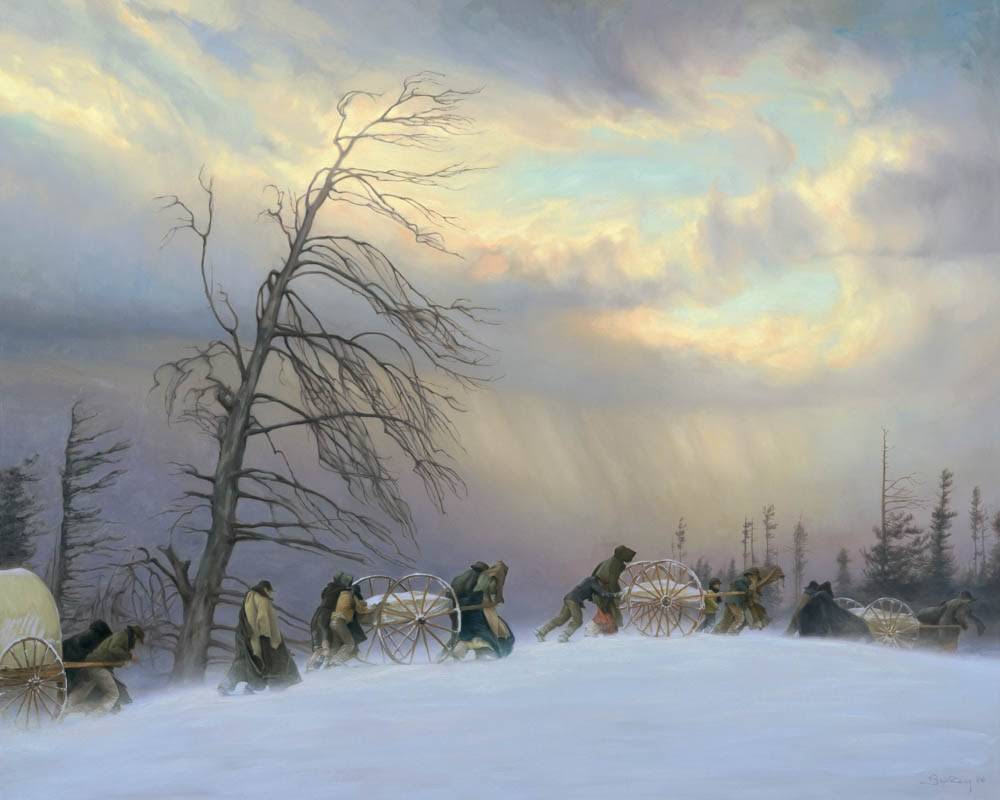