The Manti Temple holds a special place in Utah’s history and the hearts of its visitors. President Wilford Woodruff dedicated it in 1888, making it the third completed LDS temple in the state. For more than fifty years, visitors would flock by the thousands to watch the Manti Pageant or Mormon Miracle Pageant.

Performances aren’t the only thing that sets the Manti Temple apart. Similar to other LDS temples of the time, it was designed using a castle-like architecture, illustrating the spiritual fortitude of the early saints. Even today, situated atop Temple Hill, the Manti Utah Temple continues to be a beacon of hope.

Perhaps that’s why so many of our artists have worked hard to capture its majesty. These images are available in prints, cards, and posters. 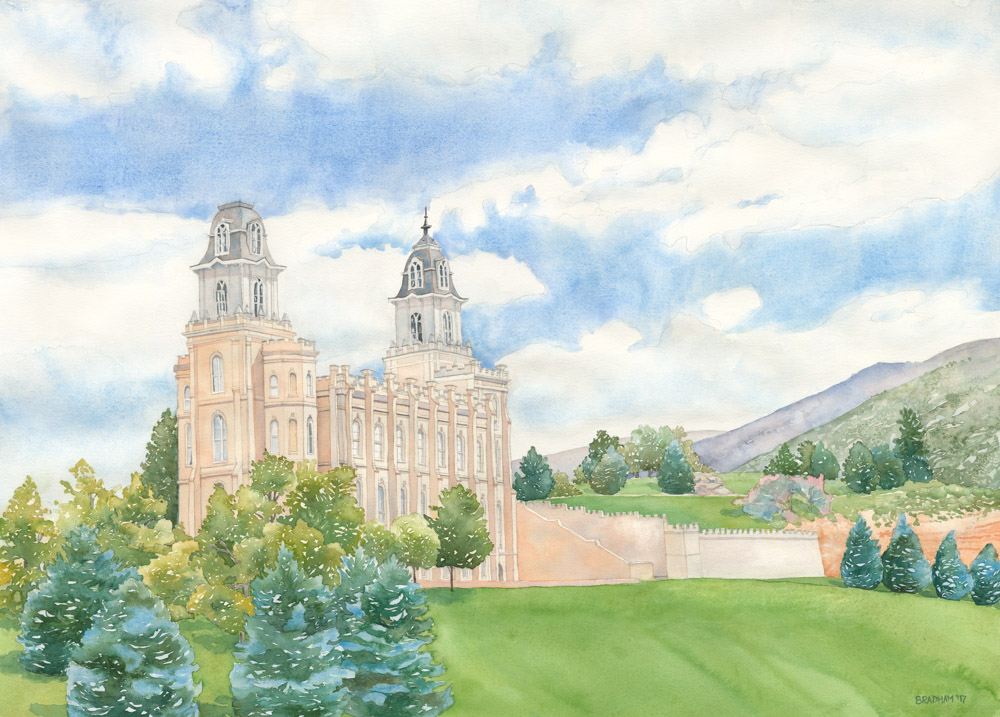 Anne Bradham’s painting represents the Manti Temple purely and simply. There are no lit-up highways or bustling city blocks. The focus is primarily on the temple and its natural surroundings. It is perhaps reminiscent of what the temple may have looked like when first constructed. 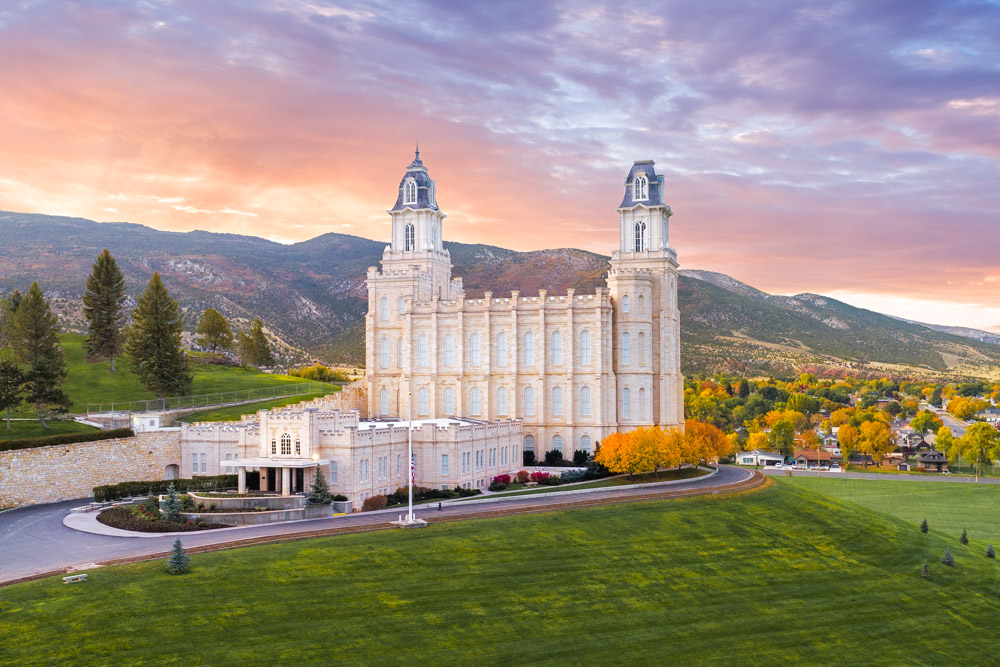 This beautiful piece by Lance Bertola brings to mind what temples represent for many of us: hope. Lance captures not only the Manti Temple but also the rising sun. It reflects the promise of the day described in the book of Revelations:

“And God shall wipe away all tears from their eyes; and there shall be no more death, neither sorrow, nor crying, neither shall there be any more pain: for the former things are passed away.” 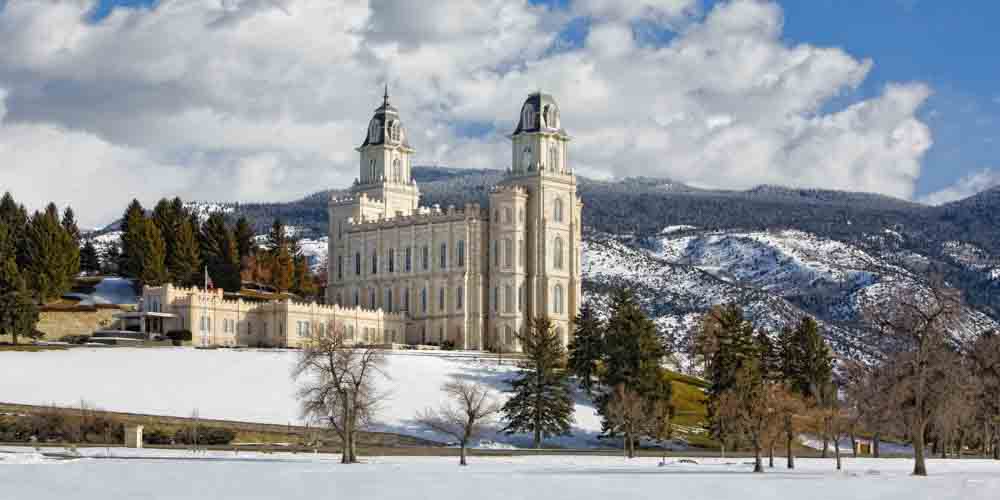 LDS temples are often designed based on the native landscape of the area. Robert A. Boyd masterfully represents the Manti Temple as it appears during the wet Utah winters. The white walls against the snowy backdrop highlight the sense of cleanliness and purity we find within the temple. 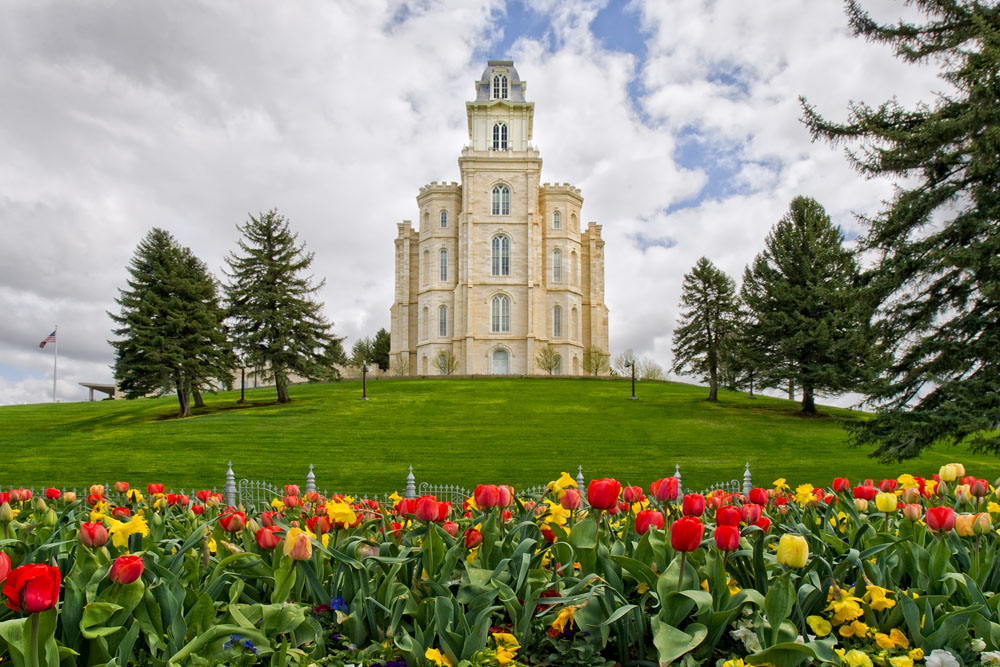 Manti Temple - Tulips and Grass by Robert A Boyd

This second photograph by Robert shows the Manti Temple from a different angle from most. We see the building from the back, centered behind a warm array of tulips. Robert’s composition is almost symbolic of the temple’s purpose, drawing our attention first to the beauty around us, then directing our gaze toward Heaven. 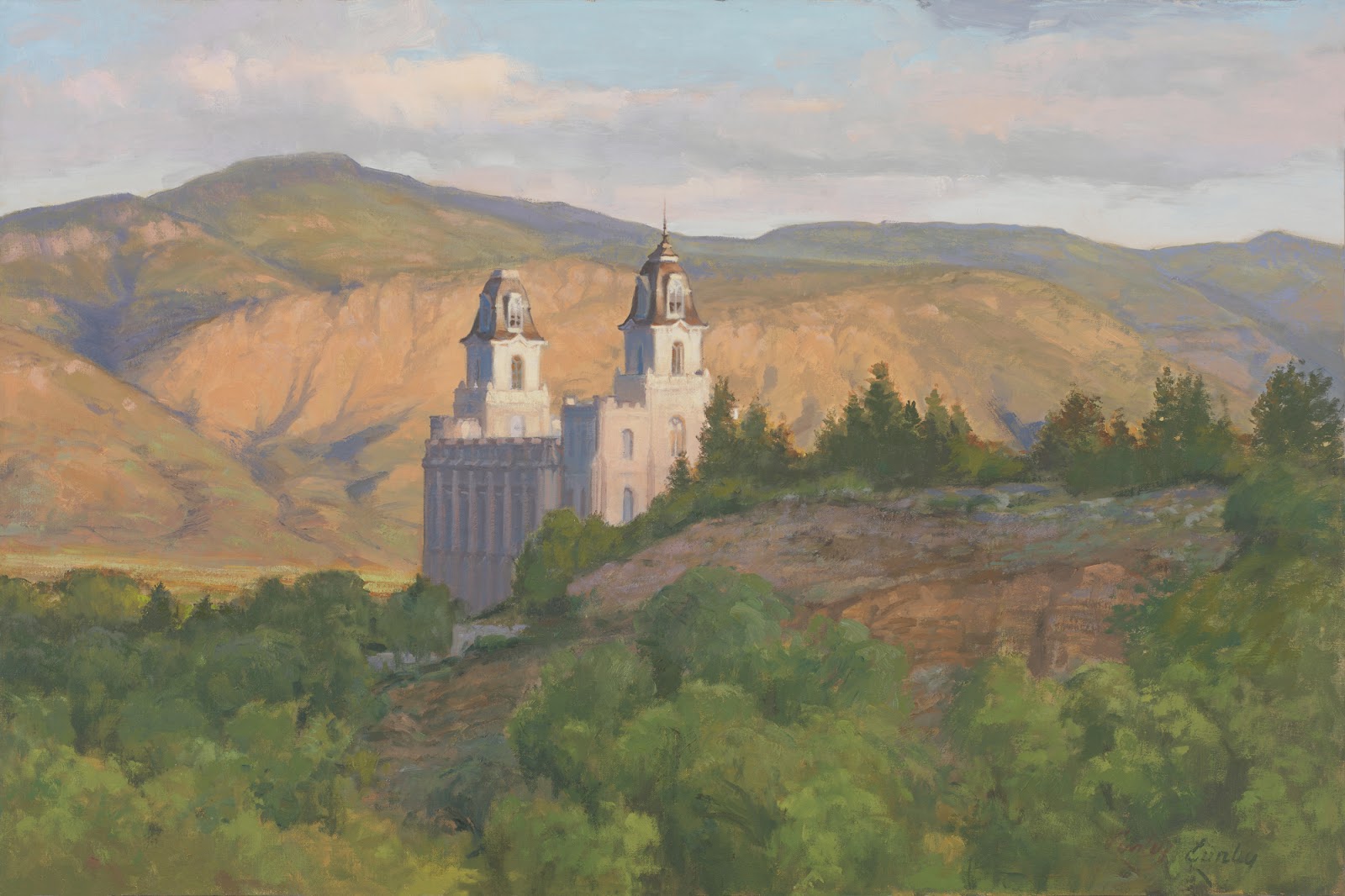 The first thing Joseph Smith describes in relating the First Vision is light. Not surprisingly, light has become a symbol of Christ’s restored gospel. As the hymn boldly declares: “A day dawn is breaking, the world is awaking.” Painter Linda Curley Christensen expertly expresses the hope of the Restoration, depicting the Manti Temple standing proudly in the light of a new day. 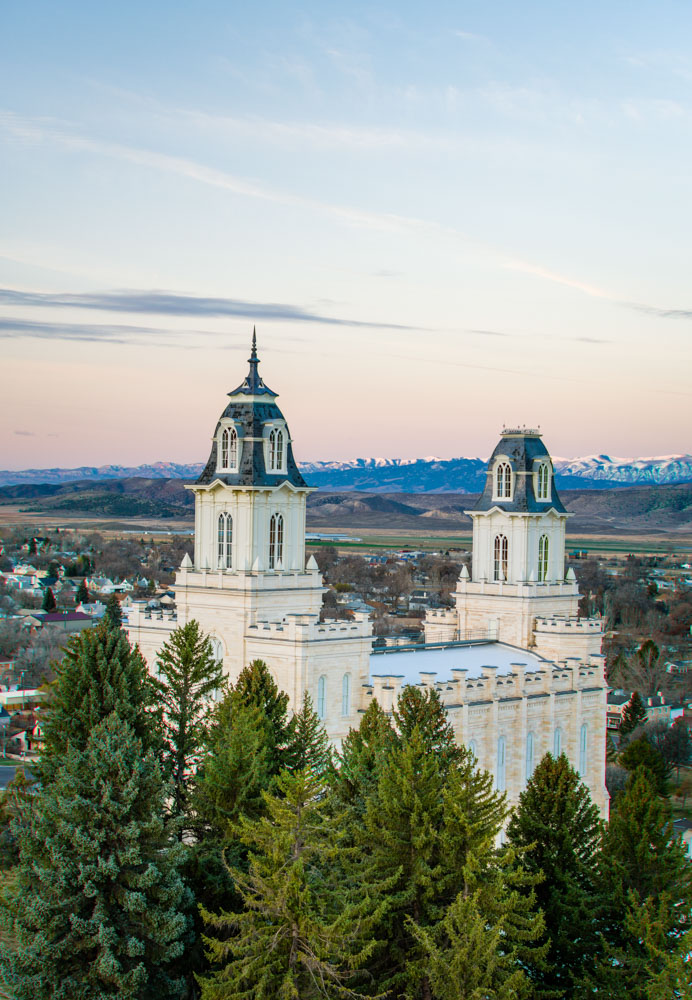 Manti Temple - Above the Trees by Scott Jarvie

Typically, LDS art depicts temples from the ground up. Scott Jarvie takes another approach in this photograph, capturing the sacred building from above--and the view is breathtaking. The characteristic blue of the Manti Temple’s roof blends in well with the distant Rockies, reminiscent of the pioneer-penned hymnal lyrics: “O ye mountains high, where the clear blue sky arches over the vales of the free.” 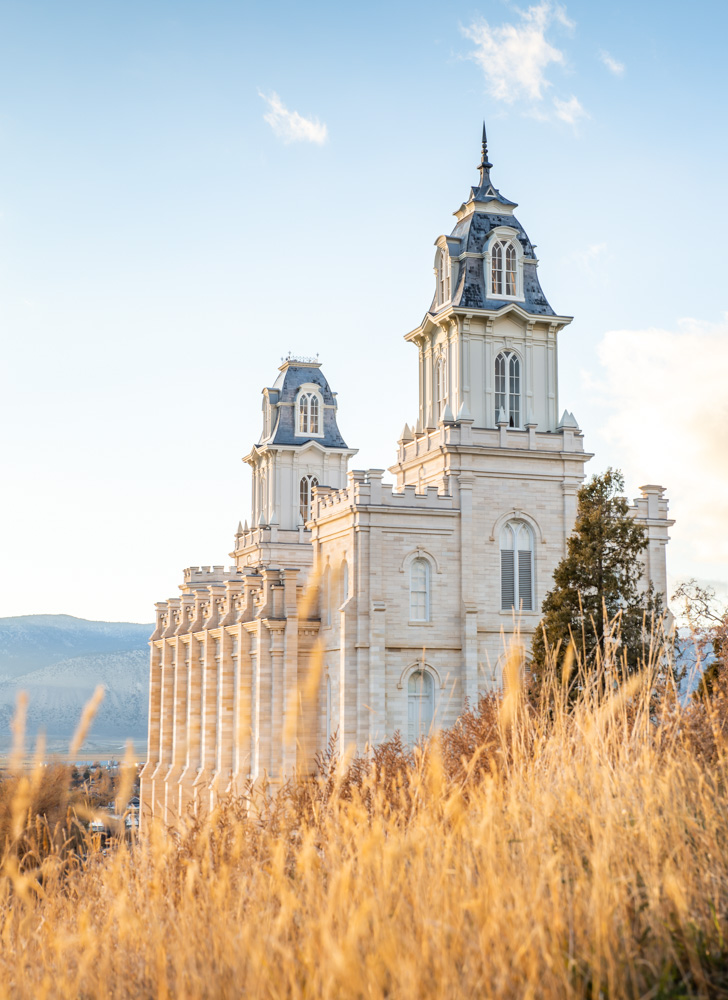 Photographer Evan Lurker gives us an almost opposite view, showing us the Manti Temple through the surrounding grasses. Appropriately named ‘Golden’ for its autumn colors, this photo calls to mind the well-loved missionary scripture: “For behold the field is white already to harvest; and lo, he that thrusteth in his sickle with his might, the same layeth up in store that he perisheth not, but bringeth salvation to his soul.” 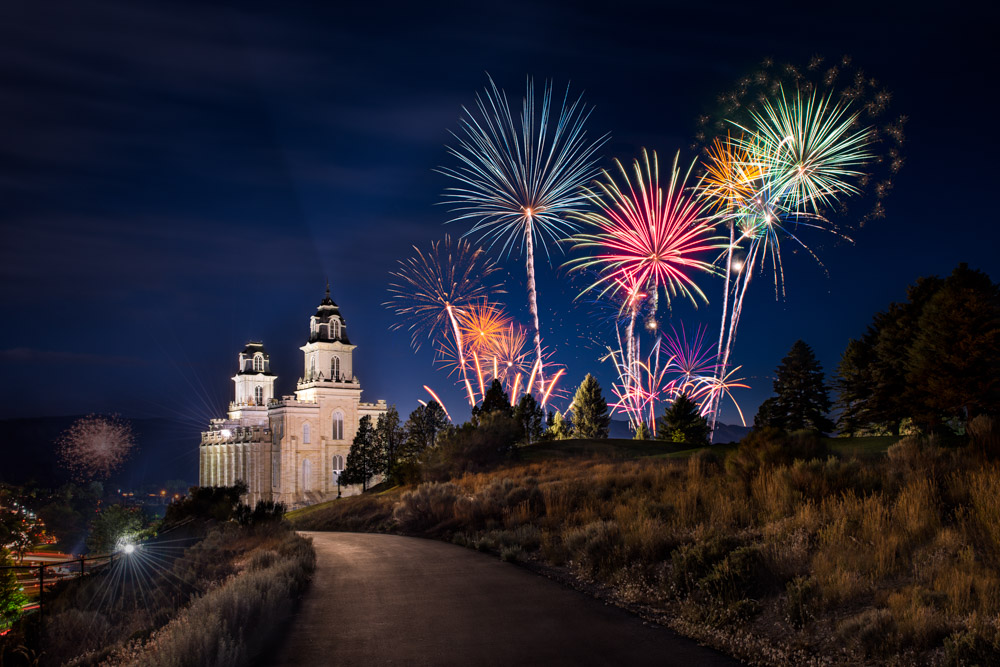 Big, colorful explosions are not something we typically associate with the temple. In this second piece by Lance, the lively colors of the fireworks against the night sky evoke a feeling of celebration. It is a beautiful reminder to celebrate our blessings. A reminder that “men are that they might have joy.” 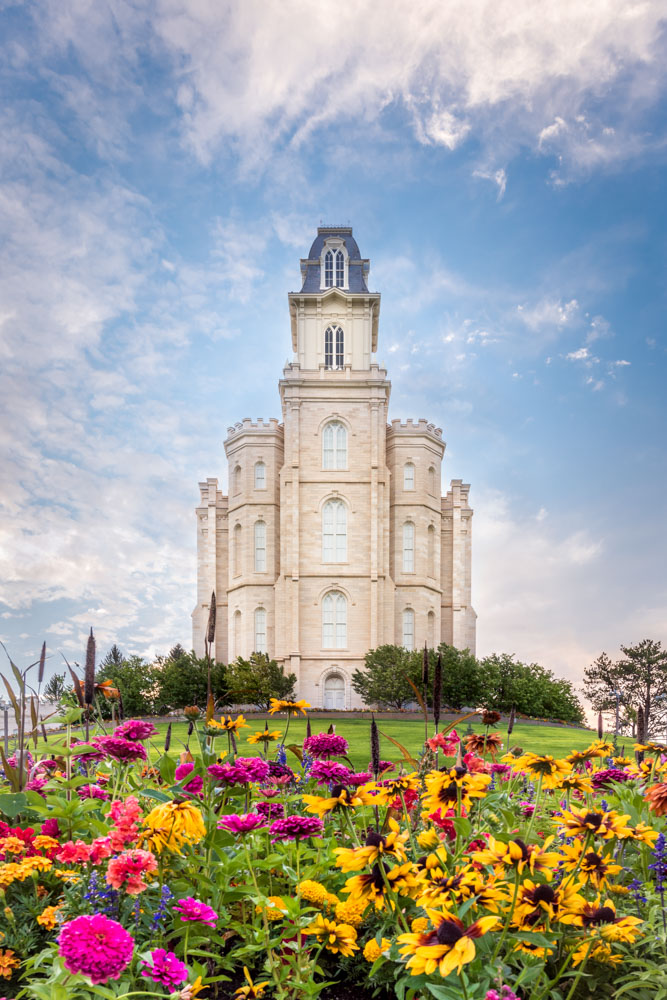 You can find those same fun colors in another of Lance’s photographs. This picture is similar to Boyd’s Tulips, but with a fun, energetic combination of flowers. It is also a closer view of the Manti Temple and its castle-like features. The overall effect is that of stepping into a fairytale. 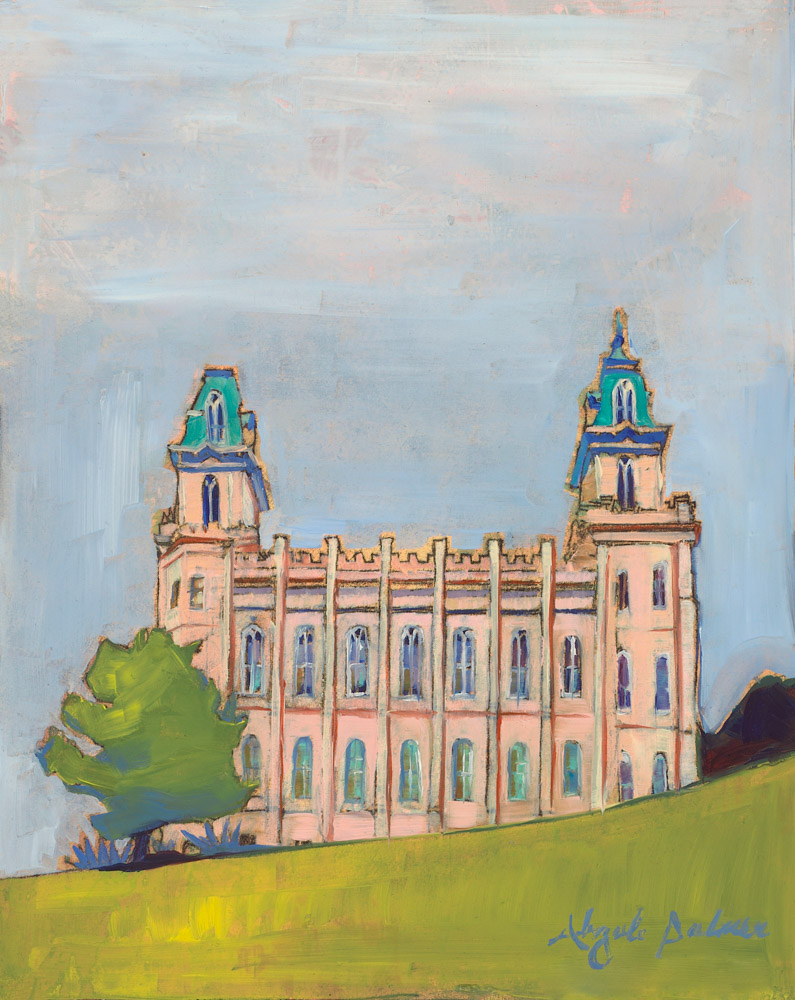 Manti Temple - On a Hill by Abigale Palmer

True to Abigale Palmer’s style, this painting comes directly from the heart. At Abigale’s grandmother’s passing, her grandfather asked her to paint a picture of the Manti Temple for the funeral announcement. Abigale had received a photograph by Stephan Hales as a wedding gift and received permission to use that photo as her reference. 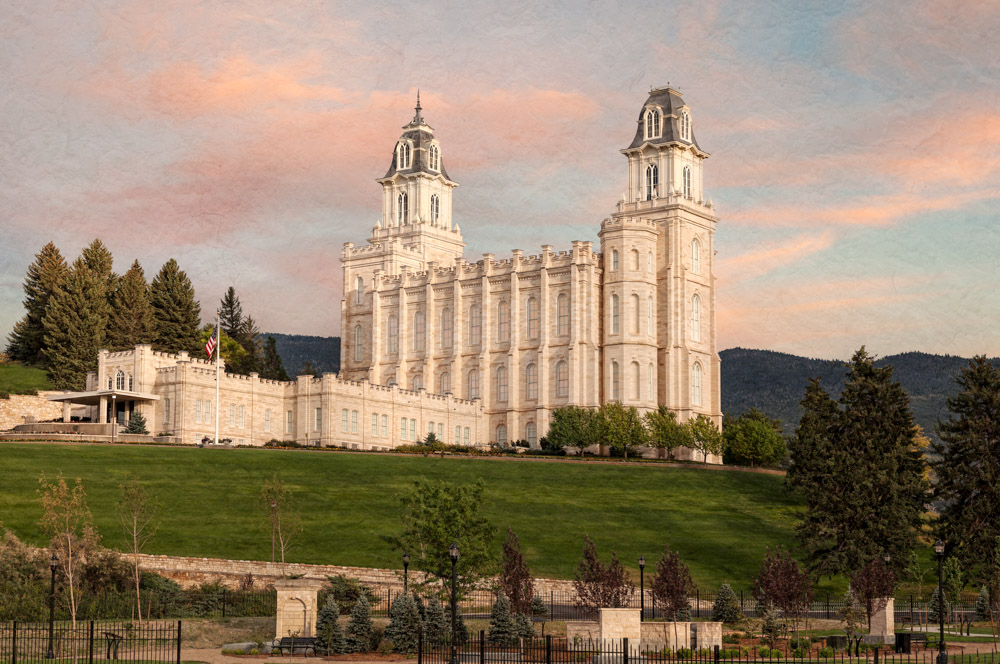 This piece is just one part of Robert’s Holy Places series. Part of what makes the early temples so beautiful is the amount of personal sacrifice that went into their construction. It took the first company of saints weeks of sluggish travel through rain, rivers, and other terrain obstacles before they reached the appointed destination for the building. The Manti Temple is a testament to their resilience and faith. 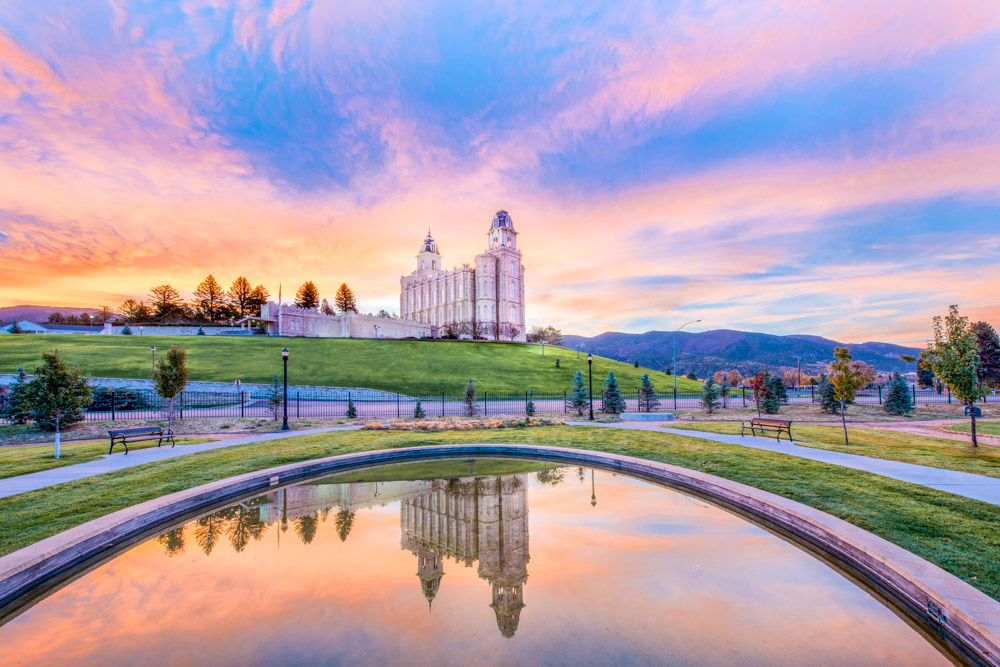 Again, Lance captures the sacred nature of the Manti Temple by emphasizing its reflection. The temple provides a place for us to do a little of our reflecting. It is where we can receive direction and inspiration and where we can see the picture of our lives in a different light.

The temple provides a place for us to do a little of our reflecting. It is where we can receive direction and inspiration and where we can see the picture of our lives in a different light. 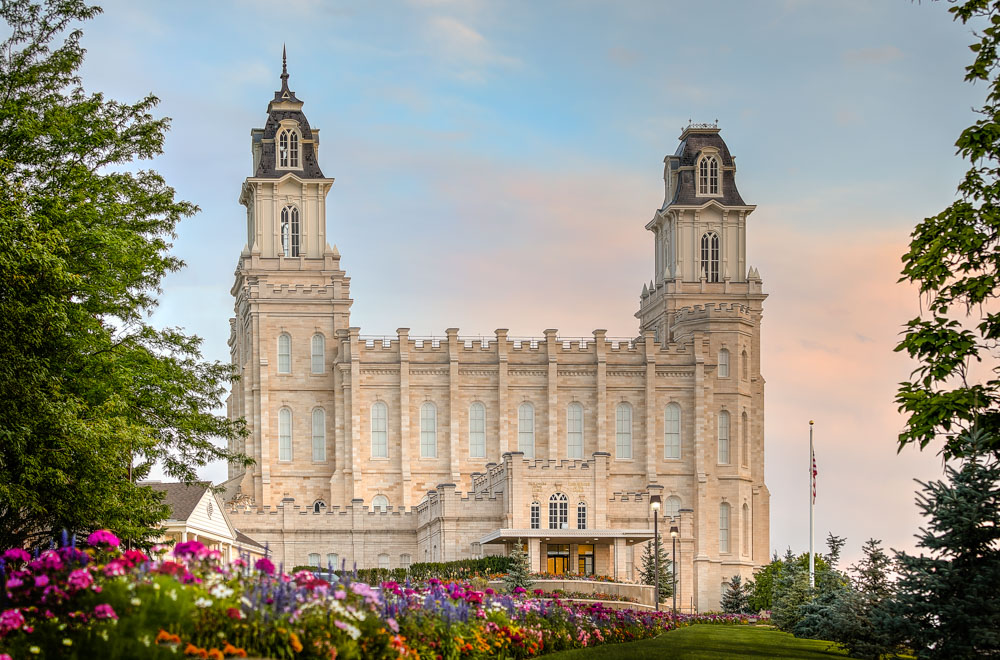 One of the things that LDS temples are most known for is the flower gardens. The Manti Temple is no exception. For this picture, photographer Kyle Woodbury chose a garden full of welcoming purples and violets that guide our eyes directly to the front doors, beckoning us to enter. 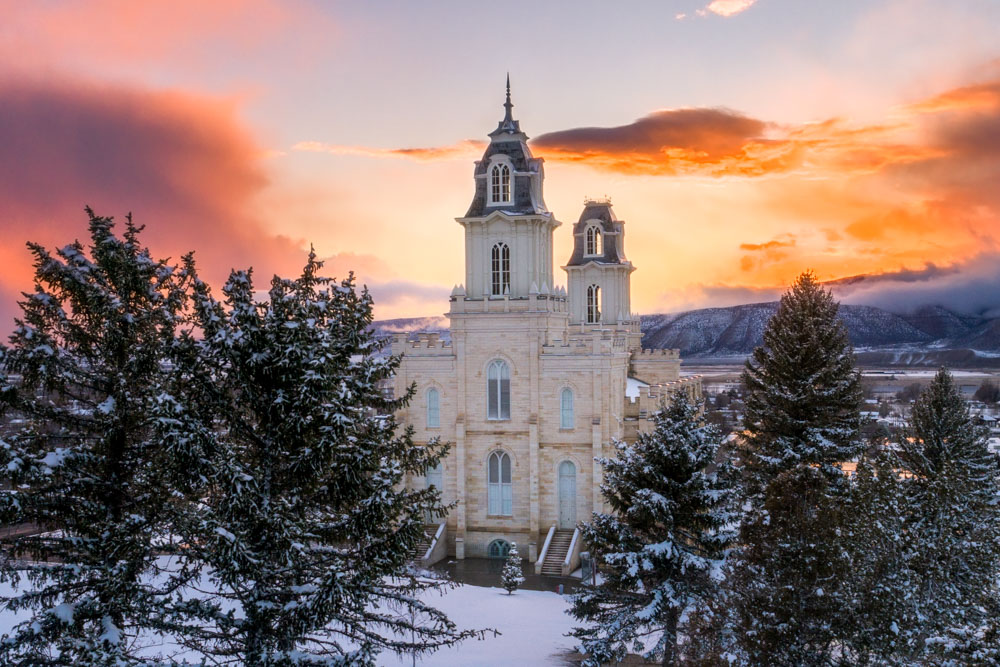 Perhaps one of the best parts about the temple grounds is that regardless of the personal winters we may be facing, these sacred buildings have a way of making us feel warm. A beautiful aspect of this piece of Lance’s work is the contrast of the orange light against the blueish landscape. It suggests a sense of warmth amid the surrounding cold. 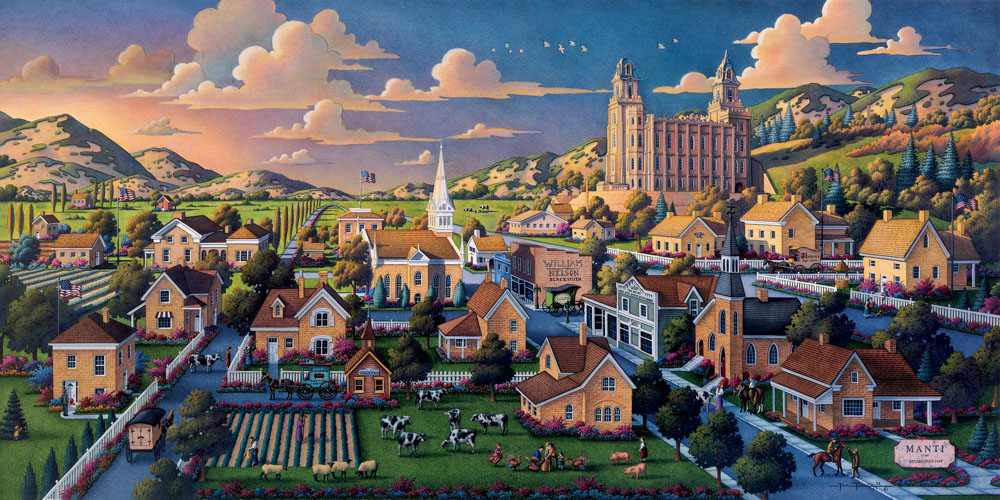 In The Life of Heber C. Kimball, an Apostle an early temple worker wrote: “In an early day when President Brigham Young and party were making the location of a settlement here President Heber C. Kimball prophesied that the day would come when a temple would be built on this hill.”

Eric Dowdle didn’t just paint the Manti Temple; he painted Manti Utah itself. This piece is a nod to the unique architecture of the older Utah homes and chapels and, of course, a tribute to the temple. 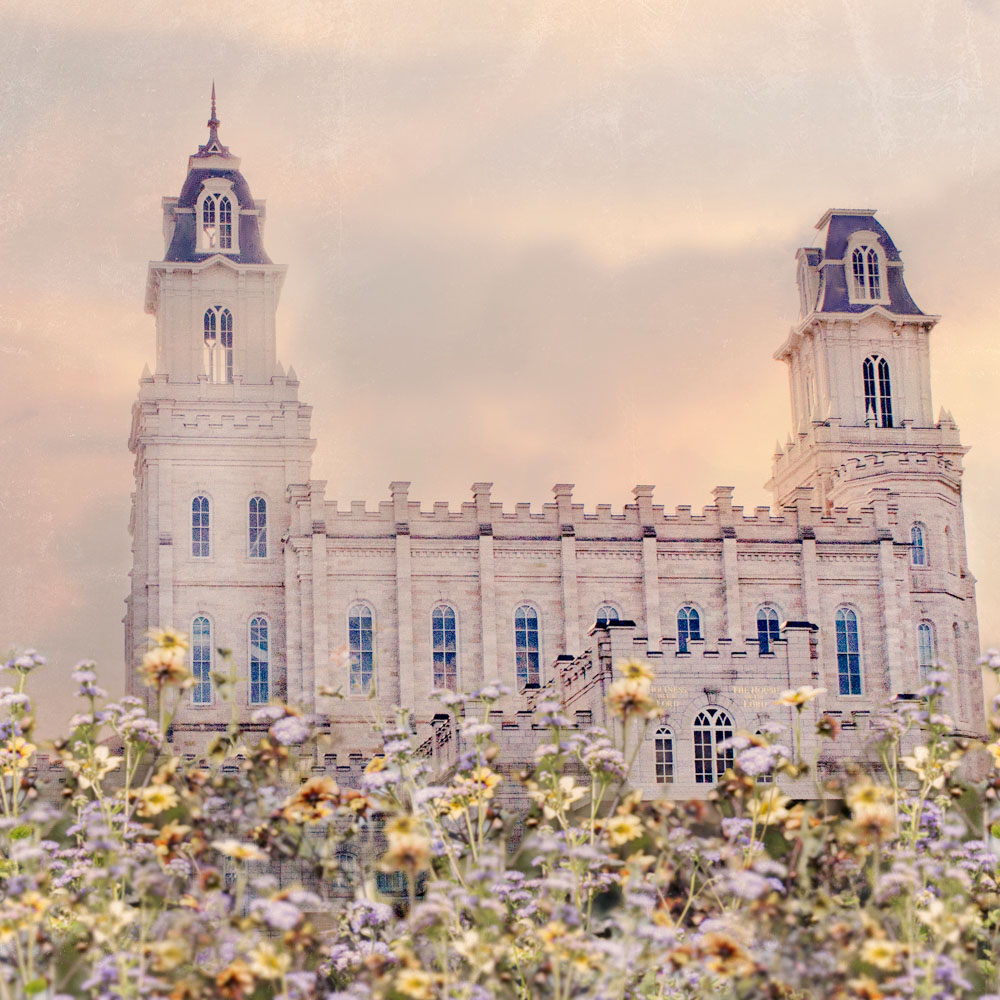 Mandy Jane Williams’ title says it all. As ornate and strong as LDS temples appear, there is a quiet dignity to the white walls and peaceful surroundings. Mandy’s emphasis on the simple yellow-and-white flowers shows us the temple through the lens of welcoming and approachable. 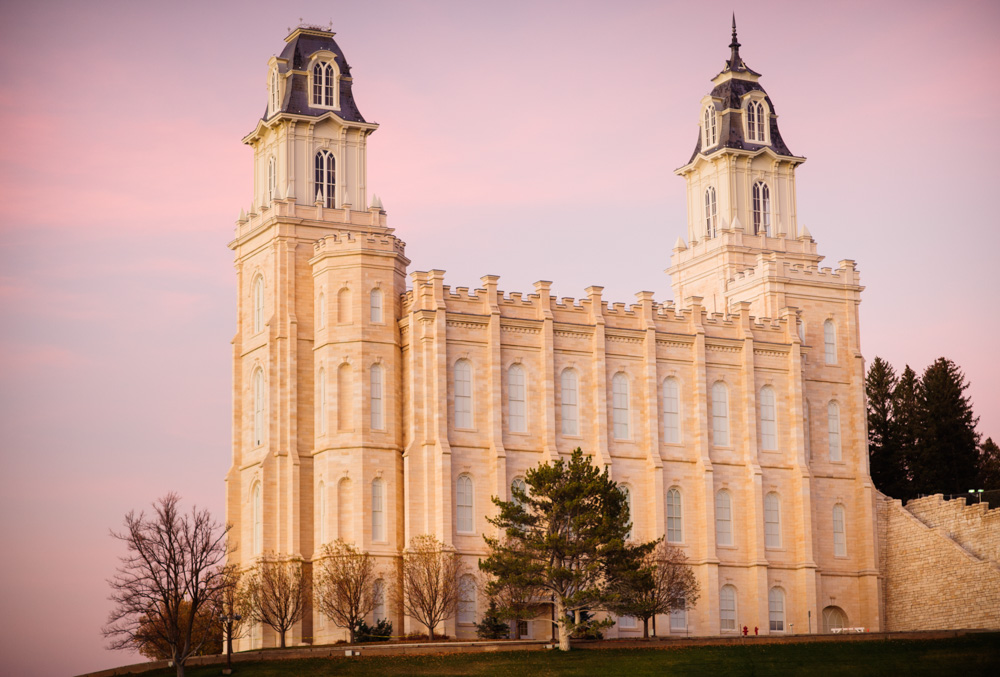 It’s amazing the sort of difference a background can make in a work of art. The pastel colors of the sky in Scott’s photo are also reflected in the temple’s windows, creating an overall mood that is gentle and calm. In an increasingly loud world, Scott shows us that there is power in taking time to “Be still and know that I am God.” 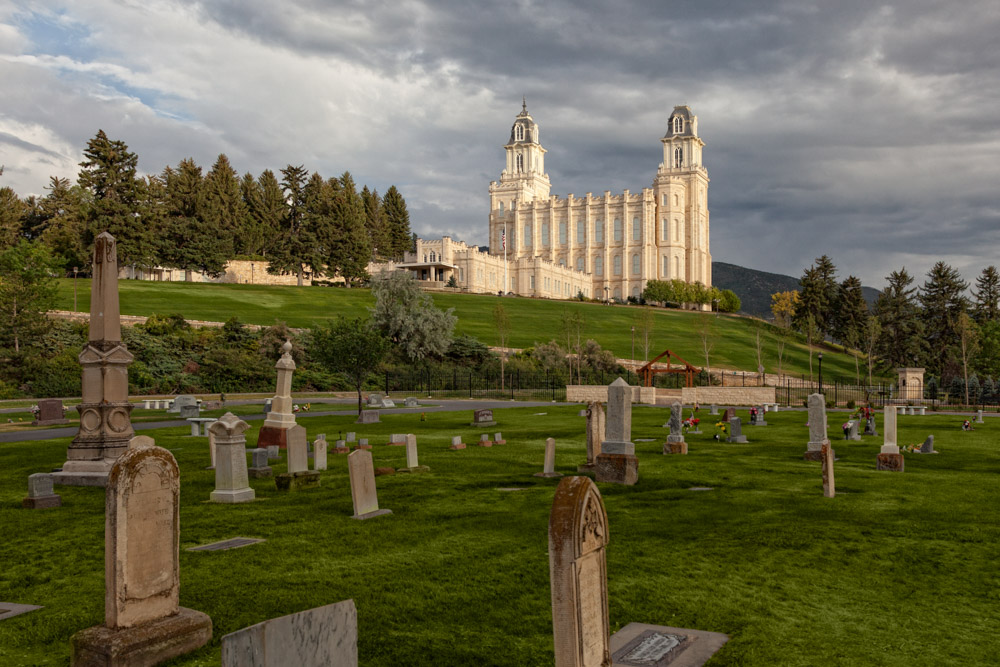 The temple reminds us that death is not the end. Our relationships can continue beyond the grave. In this photograph of the Manti Temple, Robert chose a unique perspective by including the nearby city cemetery. There is a somber mood to the rows of headstones and dark clouds, but the clear sky near the temple hill sends a soft message of hope. 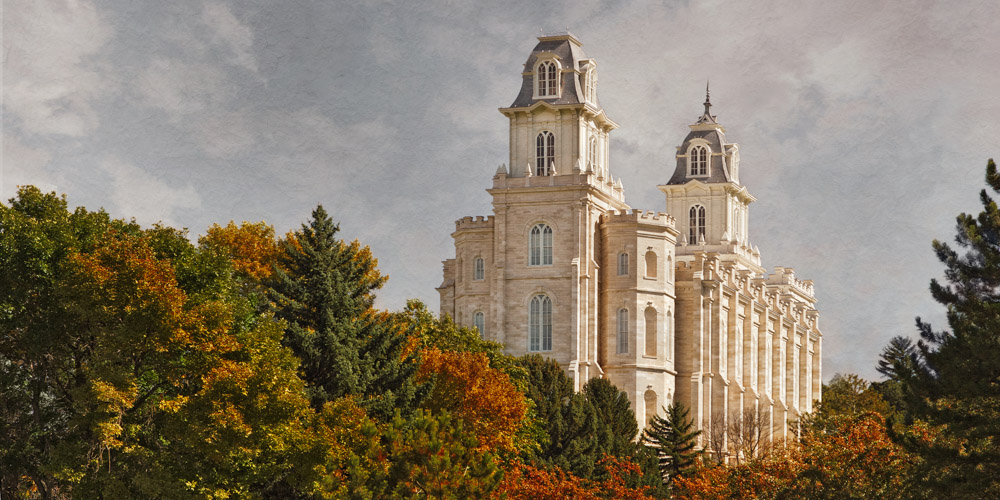 Another unique thing about the Manti Temple is the amount of color. While most of the building is white, there are tints of blue and brown all through the walls, roof, and windows. In this photograph, Robert captures a beautiful blend of the building’s colors with its autumn surroundings. 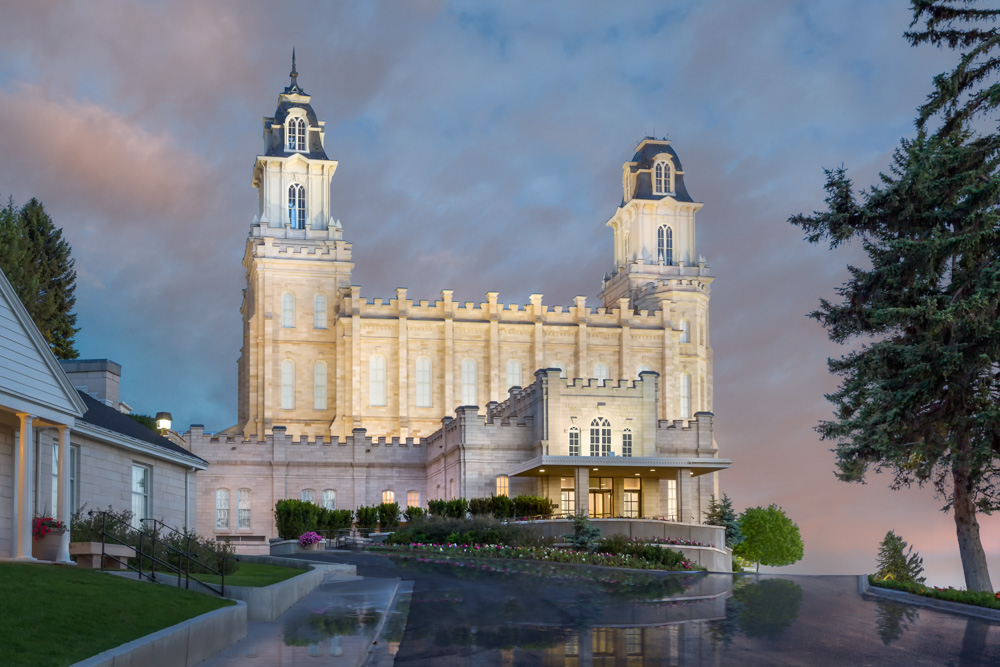 This closer view of the Manti Temple is a part of Robert’s Covenant Path series. The cooler blues and purples of this photo give it a different mood than that of his autumn-themed picture. Here, the illuminated walls of the temple stand out against the darkening sky, offering spiritual warmth and shelter.

Art contributes a lot to the feeling of a home, a bedroom, or even a meetinghouse. Which image or artist is your favorite? 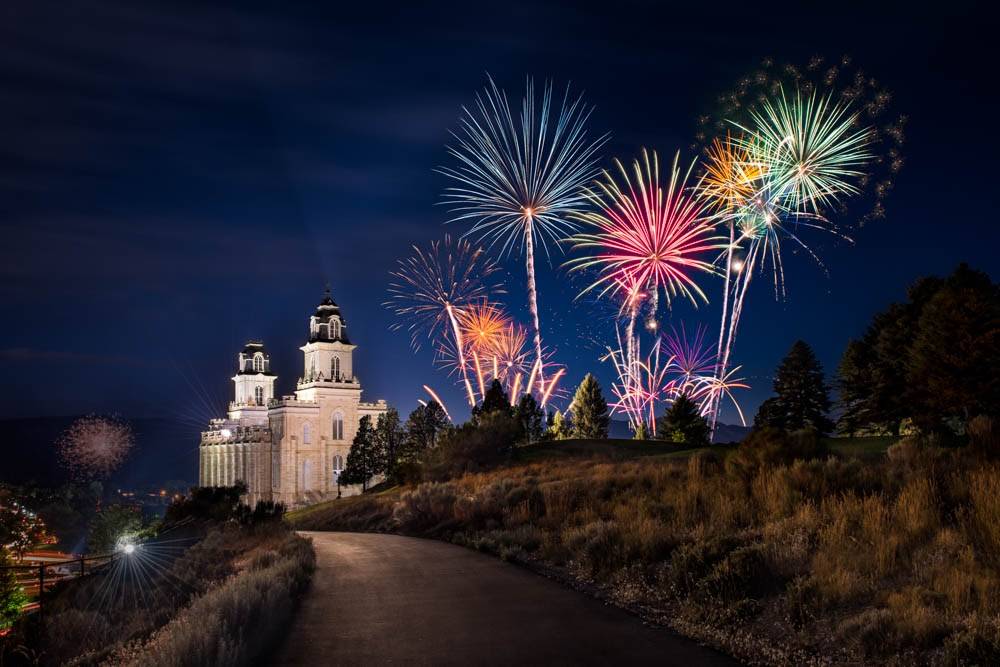