Looking for illustrations to help teach this Sunday’s lesson or your family about Jesus’ parables? Or maybe you are on the lookout for a thoughtful piece of decor to add to your home? We’ve got you covered.

Jesus often taught through story. He helped individuals understand abstract concepts by describing settings, objects, or tasks they would have been familiar with within their everyday life. Wheatfields, water, wedding parties, orchards, and flocks to name a few. Enjoy these masterful illustrations by our professional artists on a variety of Jesus’ parables.

Parable of the Good Samaritan

Jesus’ parables were often responses to questions posed by his disciples or others in His audience. For example, the parable of the good Samaritan was Christ’s answer to the question: “Who is my neighbor?” It is perhaps one of the most memorable of Jesus’ parables. It tells the story of a man who succeeded where human nature tends to falter; prejudice. He cites a real issue of the time period--the hatred between the Jews and the Samaritans--in which an individual of one side of the conflict falls victim to roadside thieves and becomes gravely injured.

Two men from the man’s own nation and belief system walk past him, too preoccupied in their own affairs. It isn’t until a man from the other side of the conflict approaches that he receives any aid. And not just aid, but special care. The Samaritan man cares for the Jew man as if he were a dear friend. 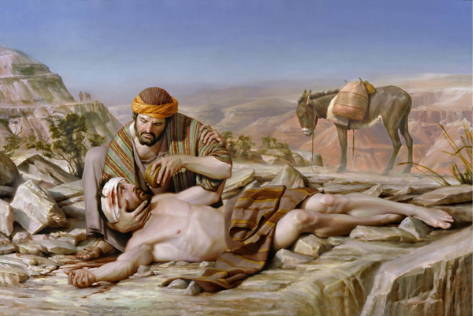 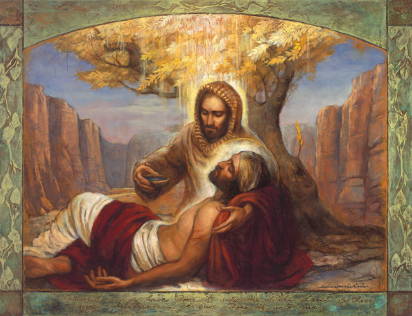 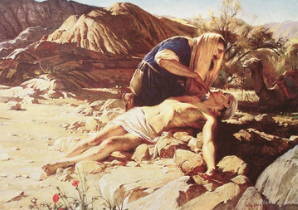 The Good Samaritan by Walter Rane 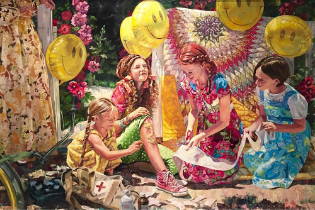 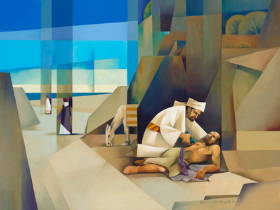 Go and Do Likewise by Jorge Cocco

Parable of the Lost Sheep

The parable of the lost sheep is among some of the most hopeful of Jesus’ parables. As with most of His teachings, it goes against the grain of what we might expect in a world of groups or individuals that often cut corners to make it to the top. In the parable, Jesus describes a shepherd who leaves his entire flock to recover a single sheep that has wandered.

This beautiful teaching reminds us of the effort God takes in helping us get to safe pastures. It is also a great example to follow as we work to serve our fellow men. 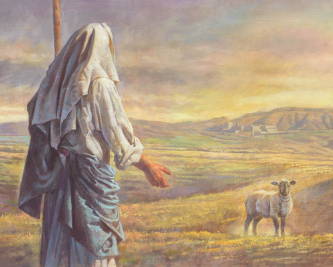 The Lost Sheep by Robert Barrett 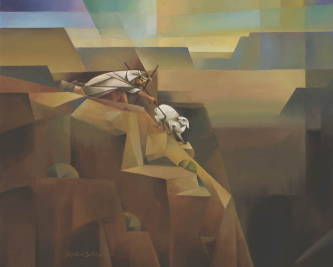 The Lost Sheep by Jorge Cocco 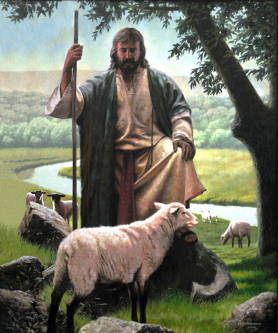 The Lost Lamb by Doc Christensen 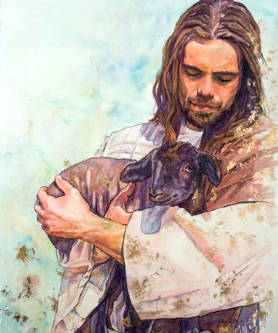 The One by Justine Peterson

For the Love of One by Eva Koleva Timothy 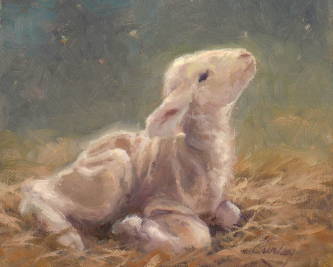 Lamb of God by Jorge Cocco 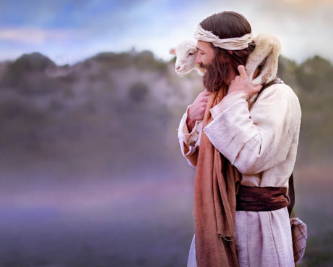 Shoulders by Kelsy and Jesse Lightweave

Parable of the Sower

Jesus’ parables appear to be simple stories at face value, but they have many layers of meaning. One great example of this is the parable of the sower. In it, Jesus describes the different outcomes that can happen even from a diligent effort at a task. The sower did not slacken his efforts in spreading seed, but the type of ground it landed on greatly determined the success of the crop.

For example, the hard ground covered in rocks or thorns quickly killed any chance for a sapling to grow, whereas plowed and prepared earth allowed for the crop to grow to its fullest and eventually bear fruit.

It’s a story that tells a lot about what it means to be the sower and serving God, as well as to be the ground that either starves or nourishes God’s word. What other insights do you draw from these artistic depictions? 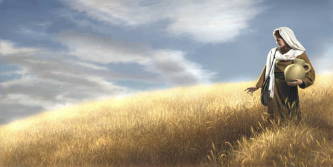 Joy of the Harvest by Simon Dewey 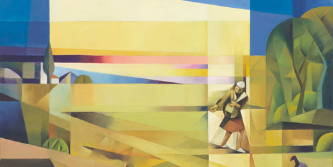 The Sower by Jorge Cocco 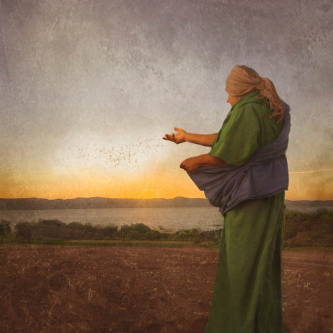 The Sower by Eva Koleva Timothy 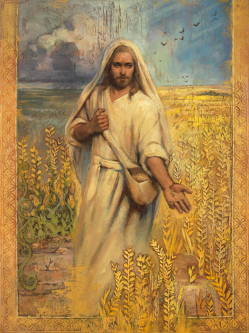 The Sower by Annie Henrie Nader

Jesus’ parables appear to be simple stories at face value, but they have many layers of meaning.

The parable of the ten virgins is another commonly known story. In this parable, Jesus describes ten young women who were waiting to meet the bridegroom on their way to a marriage ceremony held during the evening, according to the traditions of the culture and time period.

However, the bridegroom ends up delaying his arrival, leaving the women and other guests with little else to do but sleep. After some time, the bridegroom is announced, arousing everyone from their drowsiness. As everyone scrambles to relight their celebratory lamps, five of the virgins realize that all of their oil has been used up in the wait. They beg extra from the other five who deny because they only have enough for their own lamps.

As a result, the remaining five scramble to purchase more oil and, due to their tardiness and lack of preparation, are denied entrance into the wedding by the bridegroom himself. In this story, the bridegroom and the wedding represent Jesus and His second coming to earth. The virgins are often interpreted to represent us, His believers. However, even those of us who have been invited may fail to properly prepare ourselves to greet Him and it is impossible to borrow personal preparation from others.

What additional meaning do you find in these next paintings of Jesus’ parables? 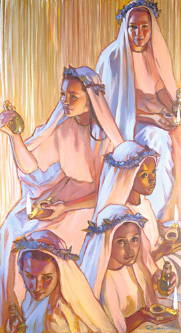 Five That Were Wise by Rose Datoc Dall 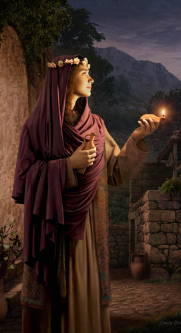 Behold, He Cometh by Simon Dewey 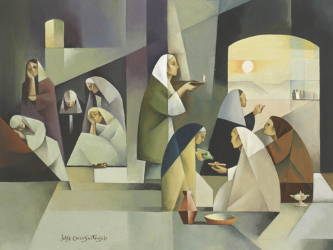 The Ten Virgins by Jorge Cocco

Parable of the Prodigal Son

The parable of the prodigal son has become a common theme used throughout culture and even literature and entertainment. It is the story of forgiveness. More importantly, it is the story of God’s forgiveness. Jesus is teaching us that if we are honest in our efforts to change and repent, we not can we find forgiveness, but blessings besides.

In the realm of Heaven, this kind of transformation sparks celebration and joy. As Jesus Himself said, “Likewise, I say unto you, there is joy in the presence of the angels of God over one sinner that repenteth” (Luke 15:10). 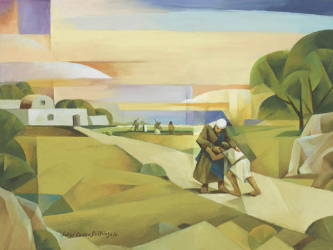 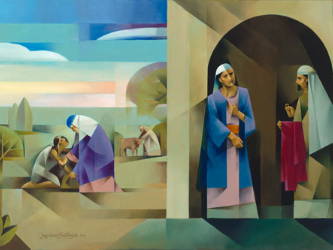 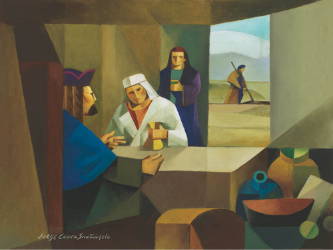 Parable of the Talents by Jorge Cocco 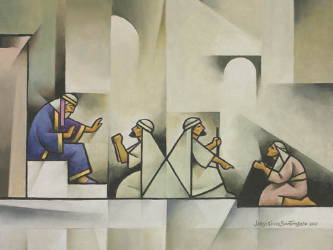 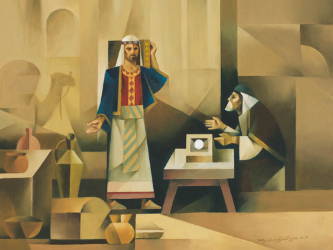 The Pearl of Great Price by Jorge Cocco

Looking for inspiring art on a different topic? Check out our online store! And if you liked what you found here, you may also like: