The Mesa Temple holds a lot of church history. For many of the early members of the church called to settle Arizona and surrounding areas, this sacred building played an important role. It has brought countless individuals and families closer to Jesus Christ by giving them the opportunity to make sacred promises with God. It has also inspired many to reach back generations and learn about their heritage in order to provide special ordinances such as baptism for those who have passed on.

The Mesa Temple was Arizona’s only LDS Temple for 75 years, from 1927 to 2002 when the Snowflake Temple was dedicated. After nearly a century of use, the newly announced renovation and rededication is a well-deserved honor for this special temple.

The state now has six temples, indicating the level of growth in the church since the early 1900s. The Mesa Temple not only directs our gaze towards the Heavens, but it also stands as a tribute to the sacrifice and efforts of those individuals and families that obeyed the voice of God’s prophet and settled many areas, despite the harsh desert climate.

The Mesa Temple grounds are expansive. Once the location of the beloved Easter Pageant, the grounds would host an entire stage and a massive crowd of people there to enjoy the experience. The lush grass, reflective pool, and tall palm trees create an oasis in the stifling Mesa air, just as the temple itself provides refreshment to the soul from the demanding surroundings of our daily lives. 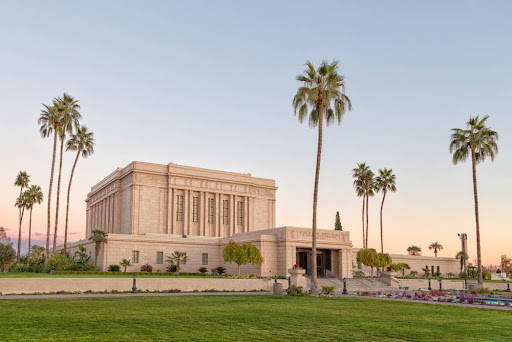 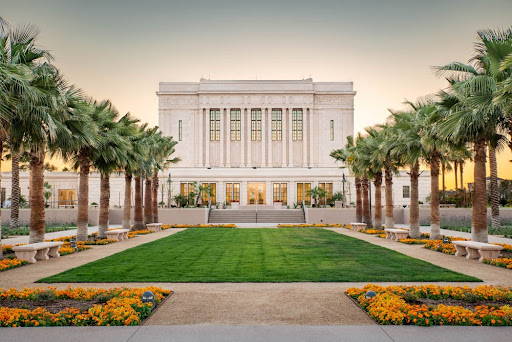 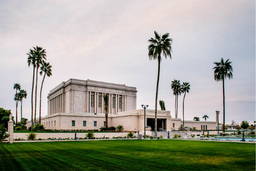 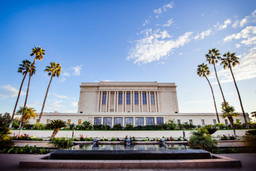 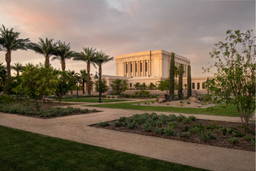 Nothing beats the bright oranges, pinks, purples, and golds of an Arizona sunset; ask any resident. Our photographers go to some impressive lengths to capture LDS temple photos at just the right time. These Mesa Temple pictures with the warm desert sky palette in the background are stunning. 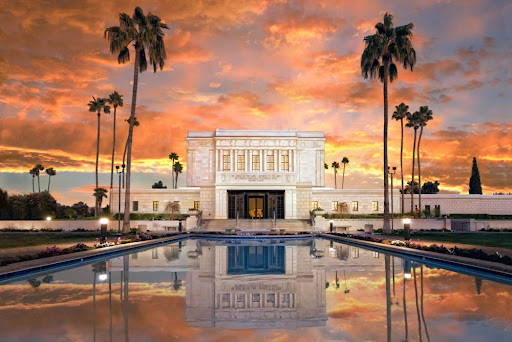 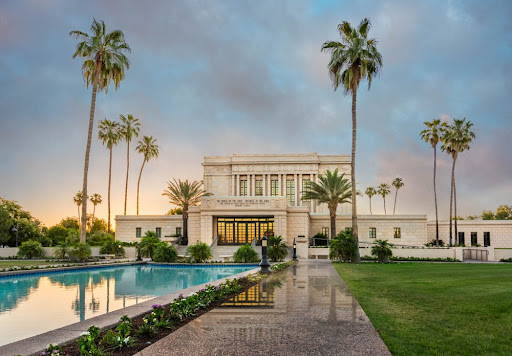 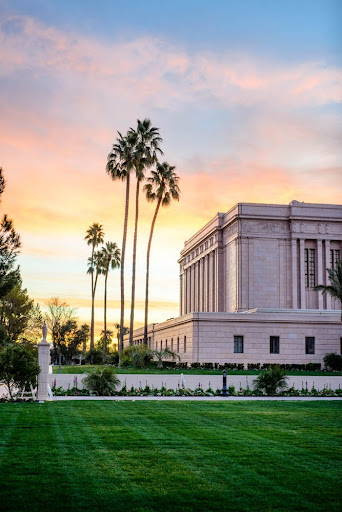 Mesa Temple - A Side of Sunrise by Scott Jarvie 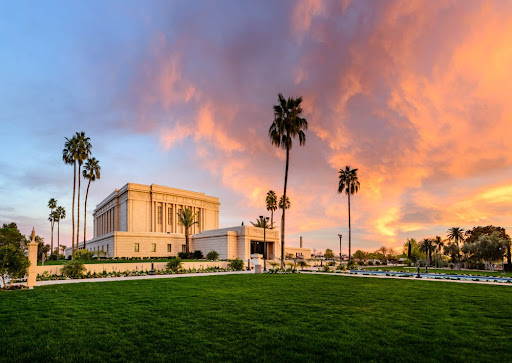 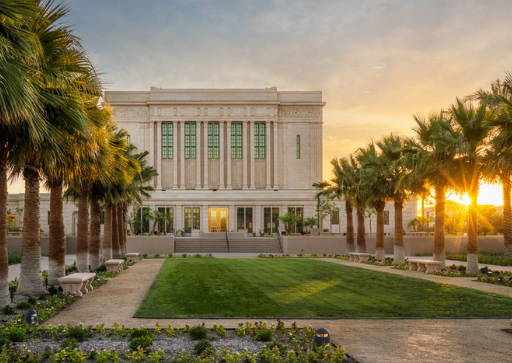 Mesa Temple - Fire of the Covenant by Robert A Boyd 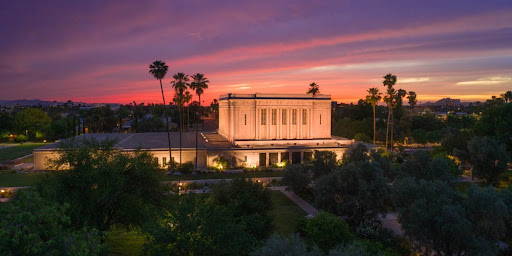 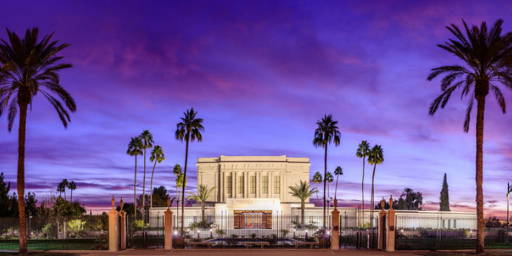 Reflection pools are a staple for many LDS Temples. And the Mesa Temple might have one of the largest. This beautiful pool reflects the tall palm trees against the clear desert sky. It further symbolizes the spiritual oasis that any temple provides, especially when we find ourselves in times of spiritual drought. Have a favorite from these shots by our photographers? 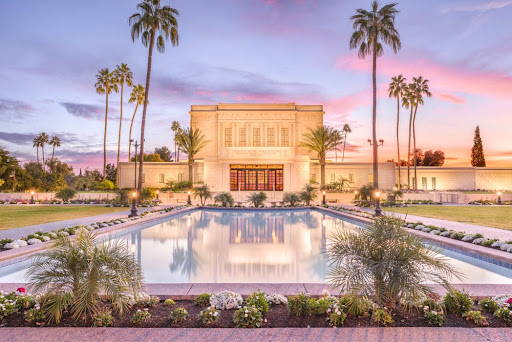 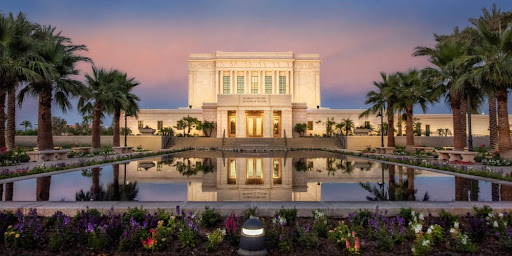 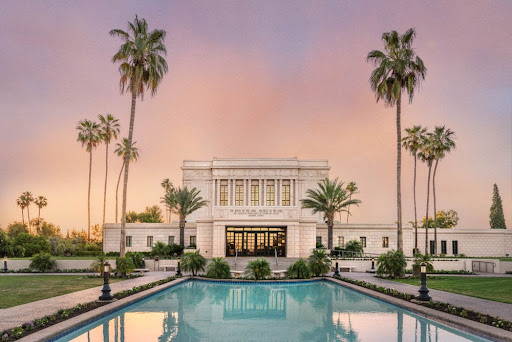 Mesa Temple - A House of Peace by Robert A Boyd 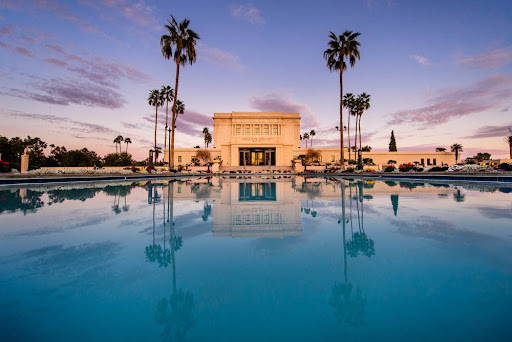 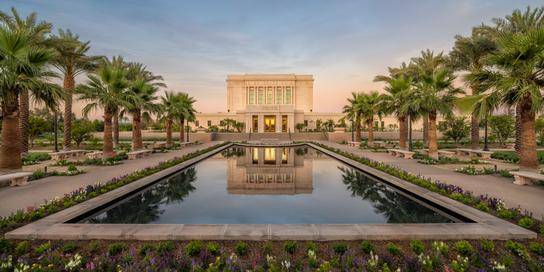 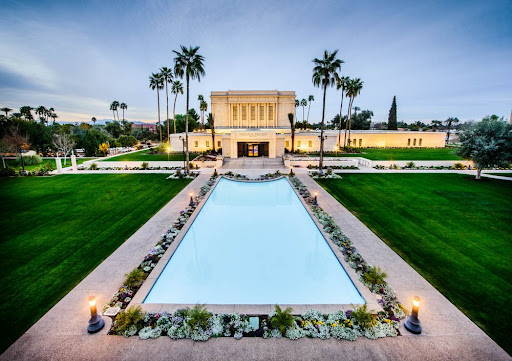 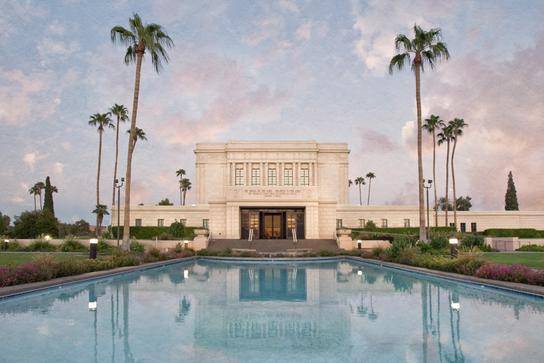 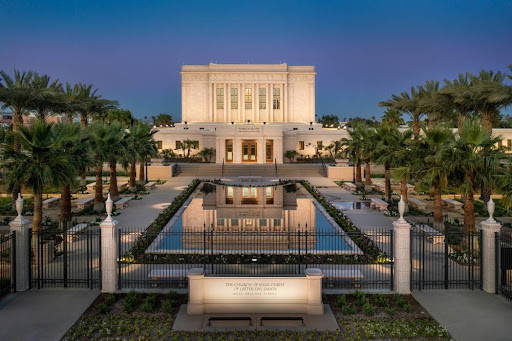 Mesa Temple - Reflection of Hope by Robert A Boyd 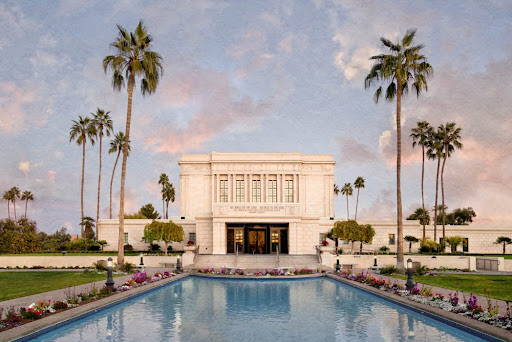 The grounds immediately around the Mesa Temple are green and lush. Beyond that is a sprawling cityscape that pushes the traditional picture of dirt, cacti, and tumbleweeds further out of the picture. However, one of our photographers, Robert, has captured some of the desert-themed landscaping done on the temple grounds. As with any LDS temple, the culture and history of the local area are included in the architecture and landscaping. 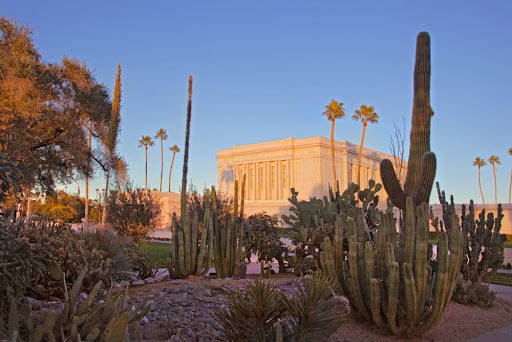 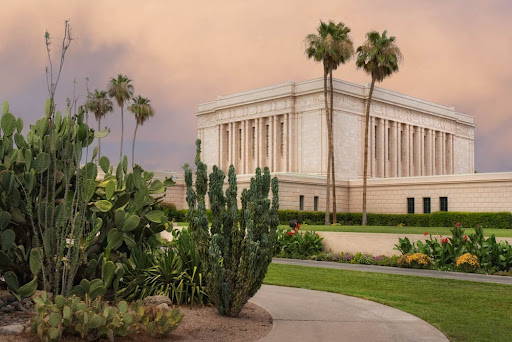 Lastly, we wanted to share this poster with you. It’s one of many LDS temple posters available in our online store and is perfect for any teen, missionary, or college student looking to add some inspiring decor to their room or apartment. 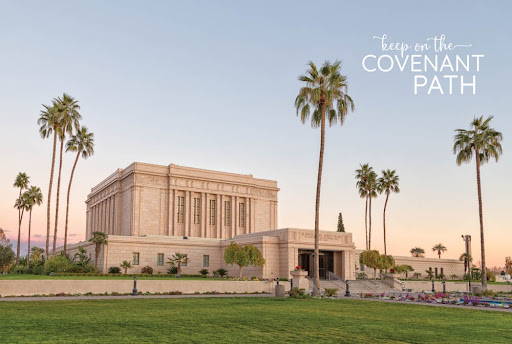 See our entire collection of Mesa Temple pictures in our gallery.